Turf Backing: The Difference Between Hole-Punch and Flow-Through

What you need to know about turf backing

People often come into our showroom and ask questions about turf backing. For people unfamiliar with turf lingo, turf backing is the material that holds the blades in place. The backing is made out of several different types of material. Its main function is to filter water through the turf. Naturally, this occurs if it rains, or if your turf is near a sprinkler system, or if you have pets. In the next few paragraphs, we will explore the different types of backing. 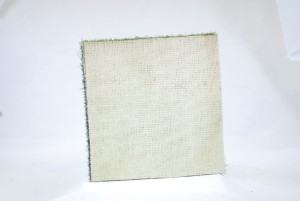 This type of backing does not allow water to pass through. It is very common with turf specifically designated for putting greens and bocce ball. Because the turf backing is non-permeable, water will not drain through the turf into the base. Putting green and bocce turf is very dense and requires a large amount of infill, and because of this, traditional drainage technology is very difficult.

Hole-punch backing is the industry standard, however if you were to punch holes in a putting green product, there would be visible chunks of turf missing. Because of this, golf and bocce products remain to use a non-permeable backing. 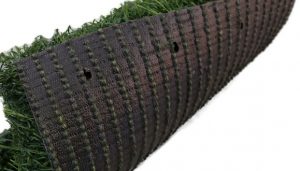 As previously stated, hole-punch backing is the industry standard for most turf products. The holes are easy to punch through the turf, and it allows for adequate drainage in most situations. Below the turf is a layer of base rock or decomposed granite, which is where liquids go when drained. This type of backing is standard for all products expect pet turf.

Hole-punch backing is the most tried and true backing for artificial turf. It has withstood years of testing and still remains the most popular kind of backing for almost every type of turf installation.

The most technologically advanced kind of backing on the market is flow-through. Flow-through backing, similar to MaxxFlow products, allows for 100 percent liquid permeability. The differs from hole-punch backing because instead of flowing through certain spots of the turf, flow-through allows water to drain uniformly through the turf.

Flow-through backing is essential for dog turf installations. When pets urinate, their waste drains straight through the backing and into the base rock. This allows the bacteria in their urine to not linger on the turf, which in turn prevents odors and aesthetic damage. Because of flow-through technology, the products tend to be more expensive, but are far more appropriate for certain types of installations.

The Final Verdict: What Kind of Backing is Best?

The truth about choosing the right turf backing is that there is no “best” backing. All of the backings have different applications, and so the best backing really depends on what you’re trying to do. As a whole, flow-through backing provides the best drainage, but if you don’t have pets, it’s not necessary.

What is your experience with the different types of backing in artificial turf? Please leave us a comment and let us know!