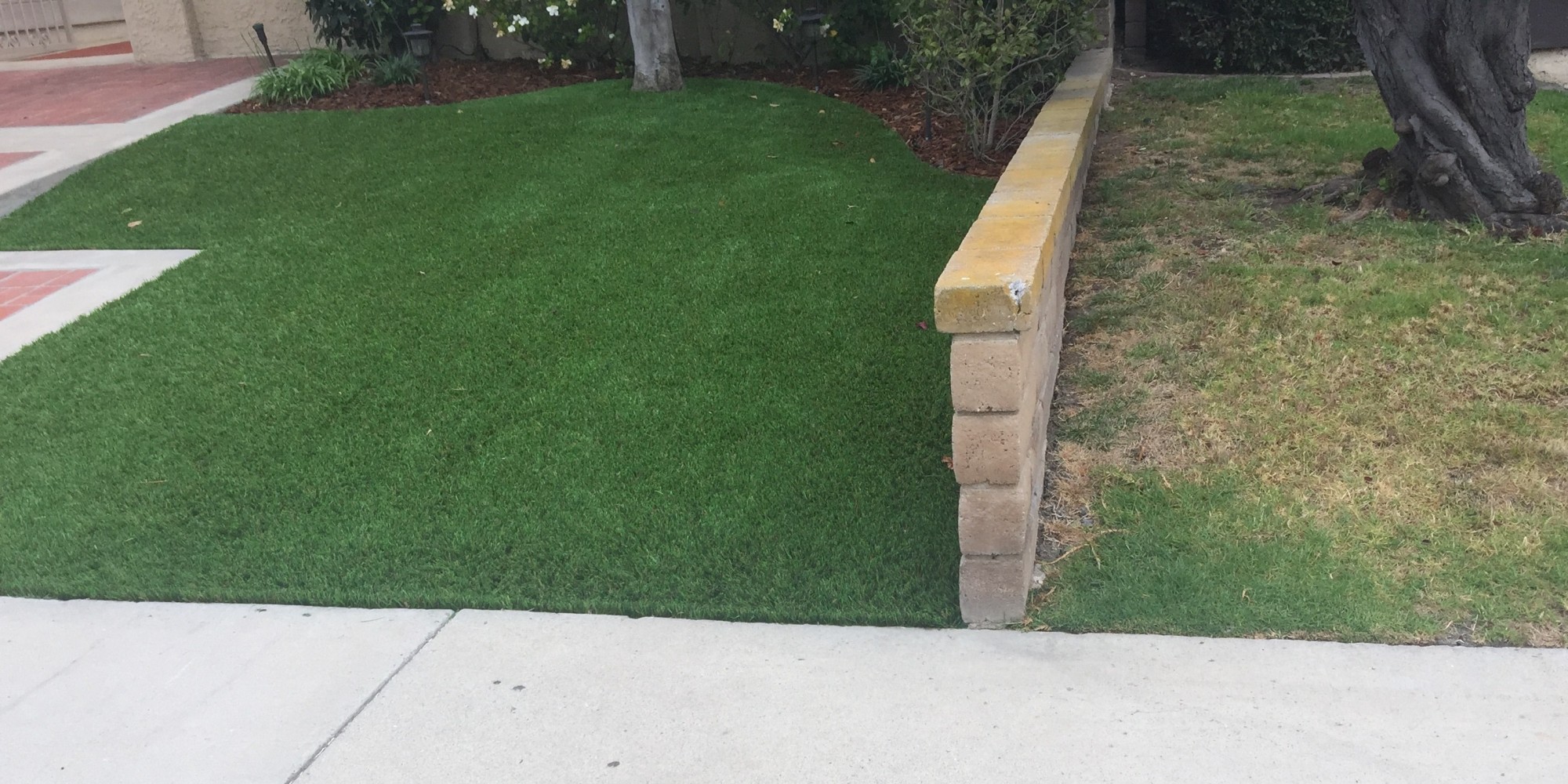 Barry Ann Friedman’s small midtown lawn is holding up to the drought amazingly well, with grass several shades darker than some of its parched-looking neighbors.

It’s also fake, and illegal under a city ordinance adopted three decades ago that prohibits synthetic turf in Sacramento’s front yards. Sitting on her front porch earlier this week, Friedman said she didn’t know that when she paid around $3,300 two years ago to have a contractor install the closely cropped faux grass.

“They can’t make us take it out now, right?” she asked.

City leaders are considering doing just the opposite. Faced with a fourth year of drought, a Sacramento City Council committee this week voted 3-1 to consider lifting the city’s ban on artificial turf in front yards. The prohibition has been on the books in some form since 1984. The main reason for the ban had been concerns the fake stuff looked too tacky. There is no restriction on synthetic turf for backyards.

“You can see that the product has changed from what it was,” said Joy Patterson, a city planner. “You go to your Costco, your Lowe’s, your Home Depot, it’s out there. You walk in the door, and they’re marketing it as an alternative.”

Rich Orlando, president of Rocklin-based Pacific Grass & Turf, said he’s seen interest in synthetic lawns jump from four to five inquiries a week at this time last year to sometimes twice that many in a single day this summer.

Still, not everyone is convinced the city should embrace synthetic turf as a way to keep up appearances while saving water.

While the artificial-turf industry points to studies that show its products are safe and environmentally friendly, some critics worry about toxins from synthetic yards and fields leaching into air and waterways. Fake turf, these critics say, is an ecological dead zone akin to pavement, and the carpet-like sheets will likely end up clogging landfills at the end of a fake lawn’s life. Most are marketed to last at least 20 years.

Some of those raising concerns, including a California state senator, cite potential risks to human health. Their main worry has little to do with the types of artificial lawns Sacramento homeowners might have installed.

The human-health fears focus largely on lead and other toxins that critics say are in the ground-up, recycled tires that make up the small “crumb rubber” pellets used primarily in sports fields to mimic dirt and give the surface a more forgiving bounce.

Contributing to such fears are anecdotal – and scientifically unverified – reports of dozens of former athletes who played on crumb rubber being diagnosed with cancer. These concerns have received increased attention as the Women’s World Cup is being played on artificial turf for the first time.

And then there’s the heat.

“I have some real concerns about us, in any way, encouraging the use of AstroTurf,” Ashby testified Tuesday. She cast the lone “no” vote on the City Council’s Law and Legislation Committee. The proposal must be approved by the city’s Planning and Design Commission before it’s voted on by the full City Council. The commission could take up the matter as early as July 16, said Patterson, the city planner.

The city currently doesn’t include replacing natural lawns with synthetic ones in its lawn rebate program, which reimburses single-family homeowners up to $1,000 to tear out front lawns and replace them with native and drought-tolerant plants. Patterson said there are no immediate plans to include an artificial-turf rebate.

“While artificial turf requires less water than a natural turf lawn, there are healthier and more ecologically sound alternatives that we would like to promote with our landscape rebate program,” the district tells potential applicants on its website.

THE PROHIBITION ON ARTIFICIAL FRONT LAWNS WITHIN 25 FEET OF A CITY STREET HAS BEEN ON THE BOOKS IN SOME FORM SINCE 1984.

Some other California cities, including Roseville, do issue rebates for replacing grass with artificial turf. Roseville spokesman Sean Bigley said city officials factored both water savings and aesthetics in its decision.

“As the industry has developed more, the product is getting better and better,” Bigley said.

Representatives of the synthetic-turf industry say their products pose no safety threat and are an environmentally conscious choice because they don’t require water, fertilizer, pesticides or mowing, which releases pollutants. The Synthetic Turf Council cites more than 50 “independent and credible” studies including some from state, local and federal government agencies that showed no risk to people or the environment.

Orlando, the Rocklin turf installer, echoed that position. “Even with the scuttlebutt you hear about the crumb rubber and the artificial-turf fields containing lead and whatnot … there is not one study – not a one – that has ever been done that has conclusively proven that crumb rubber or synthetic grass contributes to cancer or any sort of disease or affliction,” he said.

Orlando says crumb rubber from tires also isn’t usually used as infill for residential lawns, so that should not be a concern for homeowners.

Some scientists, however, take a more cautious view about the potential risks.

Last year, researchers at the Chinese Academy of Sciences and Stanford University published a review of the various studies that have examined artificial turf’s environmental and health impacts.

They said the studies so far have found little evidence of harm to the environment, and health-assessment studies suggested that users of artificial-turf fields, even professional athletes who are on them far more than the average person, were not exposed to elevated risks.

But they acknowledged there was a “significant knowledge gap that must be urgently addressed” through more study.

Jeffrey Silvertooth, associate dean at the University of Arizona’s School of Plant Sciences

Paul Lioy, director of Rutgers University’s Exposure Science Division, said that while he can appreciate concerns Hill and others have, he doesn’t share them. He said research has consistently shown that synthetic turf doesn’t pose a substantial environmental threat. He also had no problem with children playing on synthetic grass, including on crumb-rubber sports fields.

Lioy said that while the industry once had problems with lead and other toxins, the turf companies years ago changed production methods to address them.

“I haven’t seen that the direction of the industry has been toward making it riskier,” he said. “I think the issue is, one, perception, and, two, that it’s synthetic material and people want to know more about it.”

Heat, however, is a legitimate concern in a place like Sacramento, Lioy said.

After all, even the Synthetic Turf Council acknowledges some synthetic fields get so hot that some people water them to make them tolerable to stand on.

“You have to realize we live in a desert,” he said. “And, to really get right down to it, maybe Sacramento needs to look like a little bit drier place.”

Loren Oki, a plant specialist at the University of California, Davis, said he thinks planting grasses that require little water or cutting back on irrigation for regular lawns is preferable to covering a yard with artificial turf. “The only thing that it does better than concrete is it allows the water to pass through it and into the soil,” Oki said.

But Friedman, the midtown homeowner, hopes the city relaxes its ban, and not just because she became an unintentional scofflaw.

She said she loves her turf, and thinks green – even the synthetic variety – looks better than brown.