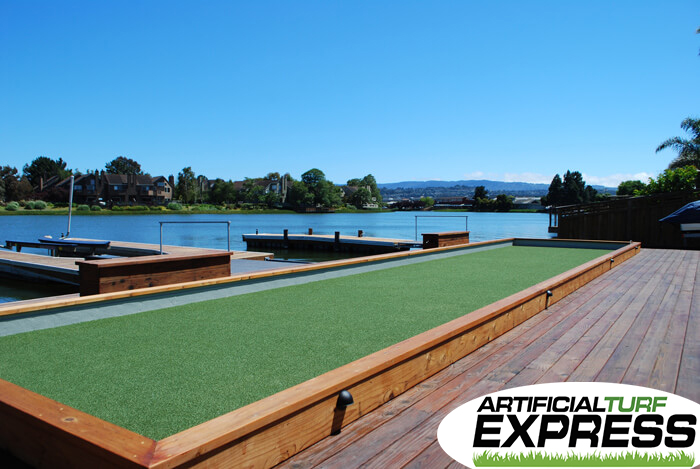 Bocce Ball on Synthetic Turf: Why people are choosing it 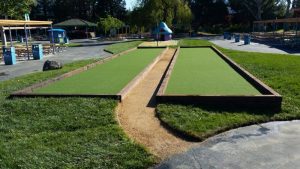 As a sport, Bocce Ball’s origins trace back to Italy. It goes all the way back to ancient Rome, and remains common within the global Italian community. Bocce ball is usually done on a standard lawn. Lately, people have began to play bocce ball on synthetic turf because it offers several advantages. Simply put, playing bocce ball on turf is far easier than natural grass.

One of the reasons for the popularity of bocce ball on synthetic turf is its low maintenance time. Bocce ball usually requires a well-manicured lawn, and because of this, turf is the best choice. Maintaining a natural lawn is expensive, resource draining, and time-consuming. Another reason that artificial turf is preferred to natural lawn for bocce is its surface consistency. Regular grass lawns can be problematic because the surface is rarely flat, which prevents the ball from rolling smoothly.

Synthetic turf always has a uniform height over the whole surface. Because of this, turf is ideal for many kinds of sport applications. Bocce ball is included in these application; it requires consistent texture for the grass. Synthetic grass’ density also influences a player’s directional control over the ball. With this in mind, some kinds of turf are preferable to others. For example, we carry two different types of putting green turf, the low-infill and pro models. The low-infill putting green turf is preferable for leisure golfers. The pro putting green product  is generally preferred because you can adjust the ball speed. This is often favored by serious golfers. The pro putting green turf is frequently used for bocce ball courts, because it provides people with more accuracy and control. 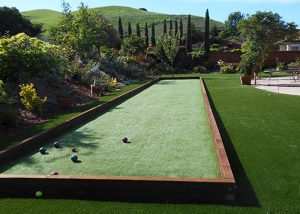 Some bocce players can install a small synthetic turf court in a basement or garage for practice. Whether they choose to install indoors or outdoors, bocce players can have the same great surface with synthetic turf. Because of changing weather conditions, cities and communities that install public bocce courts tend to choose syntethic turf. This lets people practice on a consistent surface in all seasons. Soil and asphalt are subject to change based on weather conditions. Artificial grass remains the same whether the temperatures are hot or cold, wet or dry.

As previously stated, synthetic grass requires very little maintenance. It requires no watering, mowing, trimming, seeding, and doesn’t even need direct sunlight. The only kind of maintenance is sometimes having to rake the turf or use a leaf blower to clear away debris. Sometimes, people use a soft rake can to fluff up the blades. Even without maintenance, a synthetic turf bocce ball court stays green, so it’s perfect for year-round use.