Battle over artificial turf heats up in HOAs 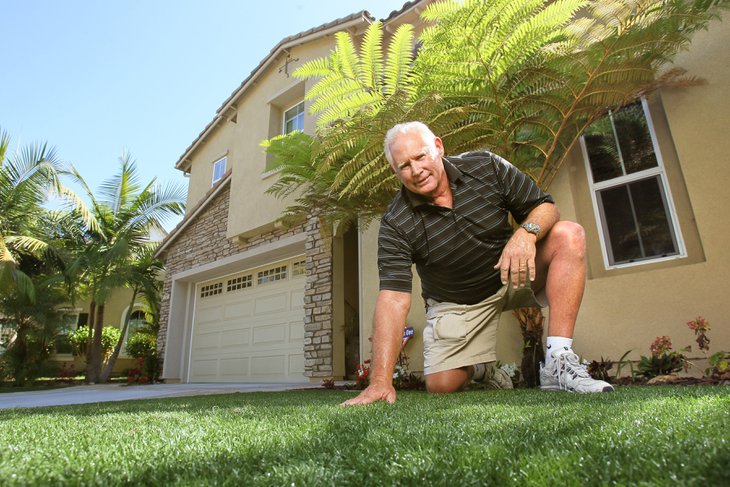 But inside the world of California’s private homeowner associations, the battle over whether synthetic turf should be allowed is still very much alive —- and heating up, month-by-parched month.

Only a small fraction of the state’s thousands of HOAs permit artificial turf on front lawns, saying its out-of-place look is a threat to property values.

This restriction, combined with California’s increased calls for water conservation, has led some HOA residents and state lawmakers to push back against the rules and seek permanent change.

Change could come as early as next year.

“We’re looking at it for next year,” Gonzalez said. “We need to have conversations with the governor’s office.”

Three years ago, Gov. Jerry Brown vetoed a bill that would have allowed HOA residents to install artificial turf without the fear of fines.

The governor’s spokesman said Brown has not commented on the topic since that time, but would consider any bill that lands on his desk.

Today’s artificial turf, supporters say, is not the tacky green carpet of the past. It looks much more like natural grass and is getting more environmentally-friendly.

That’s led many to wonder whether the HOA restrictions are necessary.

“Why aren’t HOAs leading the charge to encourage artificial turf?” said Rocky Wilson, who installed synthetic grass in the front yard of his home, at the La Costa Greens Community Association in Carlsbad, before the HOA had any guidelines on the topic. “I think people should have the right to do what they want with their own property.”

La Costa Greens is one of the few HOAs in San Diego County that allows fake grass on front lawns. Inspired by Wilson’s case, it passed strict rules that require homeowners to submit for inspection a sample of the turf they’d like to install “so it doesn’t look like a roll of carpet,” said Jean Salvia of Walters Management, which oversees the community.

New turf at the HOA must have a variety of colors to mimic natural lawns. Wilson’s turf, installed about eight years ago, was grandfathered in.

“Mine is greener this time of year,” Wilson said.

Residents in homeowners associations will get some landscaping protections starting Jan. 1, just not for artificial turf.

AB 2104, led by Gonzalez and signed by Gov. Jerry Brown, will protect residents in HOAs who replace their lawns with low-water plants.

Gonzalez said she did not include artificial turf in the bill because of environmental concerns over the synthetic material. She also held back because of Brown’s past opposition to the protections. In a veto message three years ago, the governor said individual homeowner associations should make the decision, not state government. Residents outside of HOAs are free to slap down fake grass with few, if any, restrictions. Industry figures show they are doing just that.

California’s HOAs represent a big, and largely untapped market for the industry.

There are 49,000 communities governed by HOAs, including about 4.9 million residences. That’s about one quarter of the state’s housing stock.

The product isn’t cheap. Prices can range from $6 a square foot to $12 or more per square foot depending on quality. Newer models include a variation of green colors to mimic real lawns, some even with fake brown thatch.

San Diego County residents who replace their natural grass with artificial turf can apply for $2 per square foot rebates through the Metropolitan Water District of Southern California at www.socalwatersmart.com.

Rebates of up to $3.50 per square foot are available for those who replace grass with natural, water-efficient landscaping. More about that San Diego County Water Authority program is at turfreplacement.watersmartsd.org.

Homeowners like Brian Holloway at the Rancho Pacifica HOA, east of Del Mar, have crunched the numbers and say they’re ready to ditch their real turf for the synthetic lawn alternative.

He said he’ll save water, and within a few years, money, too. Currently, however, his HOA doesn’t allow artificial lawns.

“You can’t tell the difference,” said Holloway, noting there’s already homes in his neighborhood with fake grass, unbeknownst to many.

Considering the savings on water and maintenance, Holloway imagines “we’ll have a perfect lawn.”

Environmental and HOA advocates say artificial turf is far from a perfect product.

Padding materials placed under the turf prevent soil from absorbing rainfall, causing a larger flushing of toxic substances from streets and sidewalks into storm drains, he said.

“We want landscapes to act like a sponge,” Herzog added. “And, instead, artificial turf turns it into a brick.”

Frank Rathbun, spokesman for a group that advocates for HOAs nationwide, said many such communities are “taking a good, hard look” at how they can conserve water, especially in places like California.

His group, however, is strongly opposed to government telling HOAs exactly how to do that when property values could suffer as a result.

“We believe associations and their homeowners are in the best position to determine what’s best for their communities,” added Rathbun, of the Community Association Institute.

At Artificial Turf Express, we strive to provide our customers with the most advanced and highest quality synthetic turf products. Whether you are planning a simple do it yourself project involving artificial turf, or have a complex landscaping or commercial application, Artificial Turf Express has the experience and knowledge to assist you while providing you the fairest price and excellent customer service.  *Note: We do not install turf.  We supply contractors and consumers with wholesale pricing for do-it-yourself (DIY) and contractor projects.